Radiographic inspection is based on the exposure by Either an X-ray machine or a radioactive source (Ir-192, Co-60, or in rare cases Cs-137) can be used as a source of photons.

Since the amount of radiation emerging from the opposite side of the material can be detected and measured, variations in this amount (or intensity) of radiation are used to determine thickness or composition of material. Penetrating radiations are those restricted to that part of the electromagnetic spectrum of wavelength less than about 10 nanometers.The principle of Industrial Radiography Testing is Differential Absorption. This means that different materials absorb different amount of radiation based on the thickness difference, density and presence of defect.

Generally for detection medium is films which consist of an emulsion-gelatin containing radiation-sensitive silver halide crystals, such as silver bromide or silver chloride, and a flexible, transparent, blue-tinted base. When x-rays, gamma rays, or light strike the grains of the sensitive silver halide in the emulsion, some of the Br- ions are liberated and captured by the Ag+ ions. This change is of such a small nature that it cannot be detected by ordinary physical methods and is called a “latent (hidden) image.” However, the exposed grains are now more sensitive to the reduction process when exposed to a chemical solution (developer), and the reaction results in the formation of black, metallic silver. It is this silver, suspended in the gelatin on both sides of the base, that creates an image.

Radiographic testing provides a permanent record in the form of a radiograph and provides a highly sensitive image of the internal structure of the material.

A high-energy X-ray machine can be used. It is often important to use a high accelerating voltage to provide
the electrons with a very high energy. This is because in a braking radiation source the maximum photon energy is
determined by the energy of the charged particles. 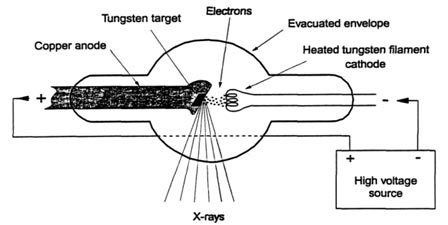 These have the advantage that they do not need a supply of electrical power to function, but they do have the disadvantage
that they can not be turned off. Also it is difficult using radioactivity to create a small and compact source that offers
the photon flux possible with a normal sealed X-ray tube.

Cobalt-60 and caesium-137 have only a few gamma energies, which makes them close to monochromatic. The photon energy of
cobalt-60 is higher than that of caesium-137, which allows cobalt sources to be used to examine thicker sections of metals
than those that could be examined with Cs-137. Iridium-192 has a lower photon energy than cobalt-60 and its gamma spectrum is
complex (many lines of very different energies), but this can be an advantage as this can give better contrast for the final
photographs. 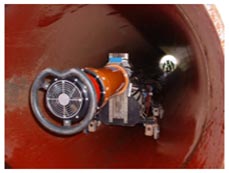 The X-Ray Crawler is similar to conventional radiography however an x-ray source tube on a crawler device is run inside
the pipe to each weld. Film is wrapped around the welds and the source tube is excited. The film is then developed in a
mobile dark-room on location. The technique is quick and can inspect on average 150 welds per day. The advantages of x-ray
crawlers are their speed and the short exposure time. The film is also crisper and much less grainy when compared to
conventional radiography using Iridium-type sources.

Designed for onshore and offshore applications

Traction unit on crawlers built to navigate inclines up to 45″ 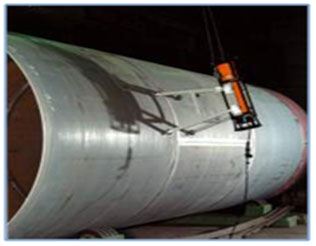 Gamma Radiography works the same way as x-rays. However, to produce effective gamma rays only a small pellet of
radioactive material sealed in a titanium capsule is needed, instead of a bulky x-ray producing machine.

As isotopes are easily transported, gamma radiography is very useful in remote areas where it can be used to check for
defects in wields in pipelines carrying gas or oil. An advantage using gamma radiography is that no power is required
and thus eliminates the need of x-ray sets, which require power to operate which may not be readily available at a remote
site. 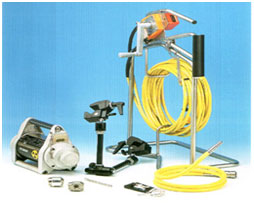