Eddy Current Testing (ECT) This is the most common technique utilized for the inspection of non-ferrous tubing, the technology is very reliable and can determine tube condition in relation to general wall reduction and the presence of local defects such as pitting and cracking with a high probability of detection when using the correct probes. Standard inspection technique for smooth tubing utilizes two separate channels for data acquisition; Absolute (wall reduction) and Differential (local defects). 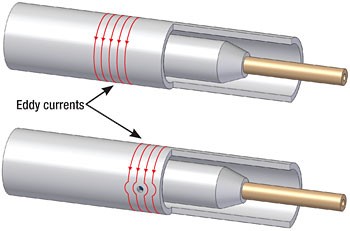 When inspecting finned tubing (chillers) an A/C probe is used to reduce noise associated with fins. Detailed analysis can be performed using software tools which can determine location of defects in relation to ID/OD of tube wall by Phase Analysis from depth curves which are generated from calibration standard. Software tools also allowing for mixing of baffle signature to evaluate flaws hidden behind baffle supports.